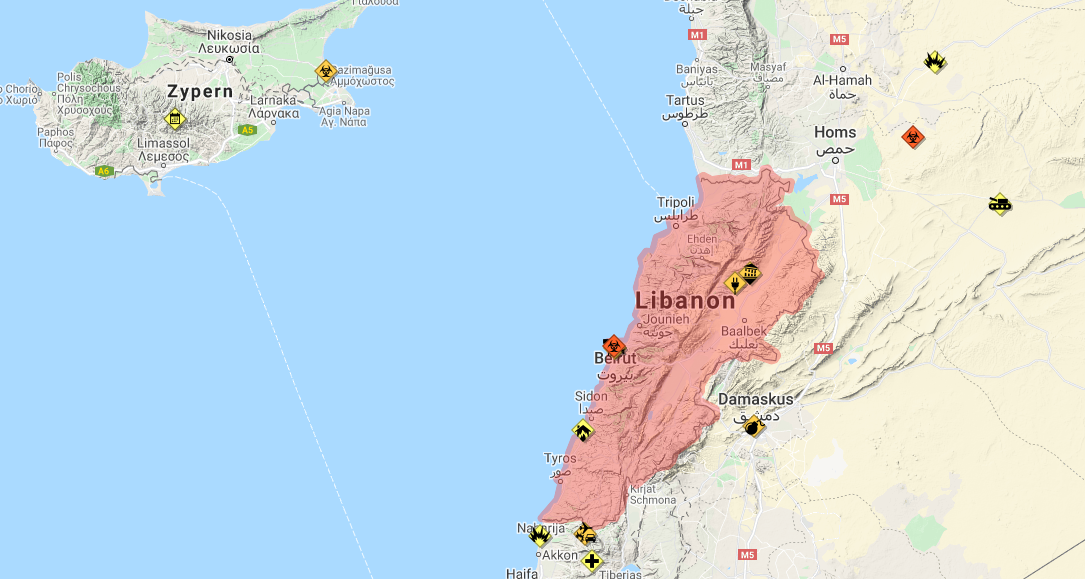 A Country Short of Everything

The multi-dimensional crisis in what was once known as the Switzerland of the Middle East had been building for quite some time but reached a tipping point in October of 2019. When a heavy-handed government attempt to increase consumption taxes combined with a deteriorating economic situation triggered mass protests. Confronted with these mounting problems, the government resigned thereby causing foreign funding to dry up and collapsing the currency of the highly import-dependent country. By 2020, prices were starting to multiply, the pandemic was adding further fuel to the fire and the economy went into a free fall with per capita GDP shrinking by 40%. Yet, despite the increasingly desperate public clamour for fundamental reforms and anti-corruption measures, the new Lebanese government also did little to address the cascading crises of the country – and then the Beirut explosion happened.

Aside from the horrific human cost of the explosion, it also caused property damage of about 15 billion US Dollars in the capital which at the time was roughly equivalent to half of Lebanon’s annual economic activity. Another devastating blow to country and economy, marking yet another government resignation. While the political parties failed to agree to a new government, the crisis grew progressively worse: Although, Lebanon had long been plagued by blackouts, in the aftermath of the explosion lack of fuel to generate power meant that receiving only a few hours of electricity became the new normal across the country – with total outages occurring with growing frequency. As a consequence, hospitals had to curtail their operations, food poisoning is rampant and over 71% of the population are at immediate risk of losing access to safe drinking water. Shortages of everything from fuel to bread have become so bad that disputes over distribution regularly result in open street fighting and sectarian violence is also spiking. In sum, wherever one cares to look one seems to find signs of a state in terminal decline, and unsurprisingly those with marketable skills are leaving in droves. While the formation of a new government in September 2021 was a rare bright spot, no change in government is likely to fix the country’s problems unless the Lebanese system of government is fundamentally reformed.

The current political system is a legacy of the brutal Lebanese civil war and rigidly divides power based on religious affiliation: For instance, the President must be a Maronite Christian, the Prime Minister a Sunni Muslim, and the speaker of parliament a Shia Muslim. In this manner, all 18 officially recognized religious groups are assured positions in government, the military, and the civil service. The result is a system where different state institutions are more akin to competing “bureaucratic fiefdoms” vying for money and well-paid posts, than a government. Yet, despite the status-quo being incredibly unpopular Lebanon’s unaccountable political elites have very little interest in changing a system that effectively amounts to a constitutionally sanctioned self-service shop and protects them from democratic scrutiny.

Case, in point the Beirut explosion arguably constitutes a microcosm of everything wrong with the Lebanese political system. First, there is the negligence, corruption, and mismanagement that made the explosion possible in the first place. Worse, the investigation into the tragedy is being constantly interfered with by those in power, summons to testify go ignored without consequence and the first judge in charge of the investigation was fired at the behest of high-ranking politicians. Particularly, Hezbollah and its allies have worked hard to undermine the investigation. Hezbollah is a hybrid organization that effectively controls large parts of the country, including interestingly enough the port of Beirut in which the explosion took place. The Shia organization is threatening to bring down the government unless the judge in charge of the investigation is dismissed – yet again. Essentially, the political class is perfectly happy to keep fiddling while Lebanon burns.

A New Refugee Crisis in the Making?

It is not like the situation in Lebanon has gone unnoticed internationally, but its’ slow slide into calamity hasn’t been particularly high on the agenda either. However, at least for Europe defusing this crisis is not optional. Lebanon already hosts a refugee population of about 2 million people, almost all of which live in abject poverty. Likewise, how much longer will the rest of the Lebanese population tolerate, hitting a new low point every other day? Since, the closest EU member state, Cyprus, is little more than 200 kilometres away, the route for a new wave of refugees seems obvious. It is near certainty, that Lebanon’s political elite will not implement any meaningful reforms of their own volition. Consequently, the international community must double down on plans to sanction those who opt to perpetuate the Lebanese crisis. Whereas they may not care about the state of Lebanon, they might feel quite differently about the state of their out-of-country bank accounts and assets. In the meantime, international actors should sidestep the corrupt institutions of the Lebanese state as much as possible. Instead, financial, material, as well as logistical support, should preferably be offered to local organizations to prevent desperately needed aid from merely lining the pockets of the well-connected. If the situation in Lebanon continues to deteriorate at the current pace, it seems only a matter of time before a new mass exodus is triggered.

Quo Vadis Ethiopia: Two Wars for the Price of One?