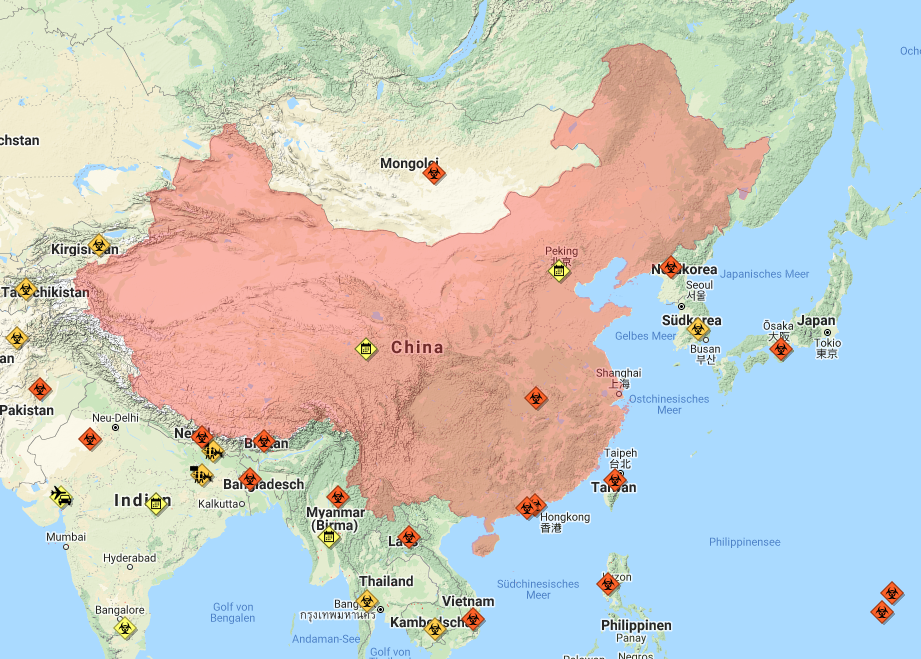 An East Asian nation walled off from the outside world, suspicious of foreigners and any contact with them. No, this description is not referring to North Korea, but increasingly also appears to fit the People’s Republic of China. In its fight against COVID-19, the People’s Republic has imposed some of the world’s most extreme pandemic control measures, both within the country as well as when it comes to entry restrictions for international travellers. Moreover, China is the last major country to follow a so-called “zero-COVID” strategy of ruthlessly stamping out any and all outbreaks through strict lockdowns and mass testing. However, with new COVID variants becoming ever more transmissible, how much longer can the world’s second-largest economy maintain this state of permanent semi-isolation?

As the pandemic enters its third year, COVID-19 appears to have been all but eradicated from the country where it first emerged. Yet, this safety from the virus comes at a price. For most international passengers, a journey to China might as well be a journey to the moon. Obtaining a visa has become an extremely arduous process, with most foreigners being ineligible, as well as tourist and student visas being suspended entirely. Undertaking the journey itself can easily become a month-long commitment or more and can involve mandatory quarantines in both the country of origin as well as in China, with constant COVID-19 tests being conducted during this period. International passenger flights have been capped at a mere 2.2% of their pre-pandemic level and are subject to frequent short-notice cancellations. Consequently, foreigners have become somewhat of a rare, and even unsettling, sight in China.

Living in the Bubble

By all accounts, Beijing’s virus eradication strategy has been an incredible success story with the country still only officially reporting a little over 100,000 cases and less than 5,000 virus-related deaths since the beginning of the pandemic. The key to this success was an army of millions of officials and workers ruthlessly enforcing draconian restrictions, invasively monitoring rule-adherence as well as rapidly mass testing entire cities. Although omnipresent surveillance and restrictions have enabled something resembling pre-pandemic normality in China, this façade of normality is beginning to show cracks.

Small infection clusters of COVID-19 infections are popping up with increasing frequency, and due to the zero-tolerance policy of authorities, as little as a single case can send an entire city of millions into a lockdown. In January 2022, at least 20 million people were under full lockdown, while many more were subject to lesser containment restrictions–just weeks ahead of the start of the Beijing Winter Olympics. At the same time, authorities have been resorting to ever more extreme measures such as sealing off millions in their homes with no advance warning. Some residents have even been forced to engage in barter trade to acquire food to survive when authorities failed to provide. Likewise, hospitals have denied patients care with deadly results, and those that have violated the rules have been paraded through the streets and publicly shamed.

The reason for the obsessive persistence of the Chinese authorities can at least in part be traced back to their initial mismanagement of the first outbreak in the city of Wuhan in December 2019. For several crucial weeks, authorities downplayed the danger of the novel disease, pressured medical professionals to stay silent, and neglected to impose any containment measures. Accordingly, the zero-COVID policy became both a way of redeeming the initial failure, as well as to contain the growing popular anger in the country. As a result, just as COVID-19 cases were surging worldwide, the Chinese leadership was able to “declare victory” over the virus. Even after almost three years, this declaration of victory is still not something that Beijing can just simply walk back.

The Omicron Crux: Population without Protection

Nevertheless, the Omicron variant might force the Chinese government to do just that. While more than 85% of the population is now fully vaccinated, they were virtually all inoculated with locally-developed vaccines which offer relatively low protection against the original COVID-19 strain, let alone one of its more transmissible variants. Even with a third booster shot protection levels are still inadequate, thereby making the People’s Republic extremely vulnerable to an Omicron surge. mRNA vaccines such as the BioNTech-Pfizer or Moderna shot would offer higher protection, but neither has been approved in China. Worse still, they were even subject to a state-sponsored smear campaign.

This situation has been further complicated by the fact that the country’s health care system is relatively weak and ironically enough, most Chinese medical professionals have little first-hand experience with treating COVID-19. Therefore, just as much of the developed world prepares to slowly enter into the “endemic phase” of the disease, COVID-19 could return with a vengeance to the country where it first emerged. In fact, cases of the Omicron variant have already been confirmed in China and it seems doubtful if even Beijing’s extreme control measures can permanently keep the highly-transmissible variant at bay.

The Cost of Isolationism and the Price of Opening-Up

Already, the economic costs of zero-COVID are mounting. The growing number of snap lockdowns of important ports and cities, factory shutdowns as well as sudden rule changes are slowing economic growth and straining global supply chains. To name just one example: In last December, thousands of Vietnamese truck drivers suddenly found themselves barred from entering China for weeks, causing mountains of spoiled produce to pile up at the border. However, the worst is probably still yet to come for global supply chains since Chinese authorities are blaming an international package from Canada for the first case of the Omicron variant in the country. In response, Chinese authorities have urged their citizens not to order products from abroad, whereas Chinese customers who had already done so have reported being subject to travel restrictions and mandatory testing.

All in all, there seems to be little chance for the previously hoped for reopening of the country after the Beijing Winter Olympics in February. Indeed, with Chinese President Xi Jinping seeking an unprecedented third presidential term in October, it appears unlikely that the COVID-19 restrictions in China will be eased significantly before the end of the year. It is also important to note that these restrictions are by and large not imposed on an unwilling population. In contrast to the “chaotic” pandemic responses in much of the Western world, China’s performance has even spurred considerable nationalist pride. Thereby making it all the more difficult for the Chinese government to move away from its zero-COVID policy. Ultimately, no matter how much time passes, Beijing’s options will probably stay the same: Learn to live with the virus or potentially remain in a state of semi-isolation for years.

To be informed of any changes to entry and travel restrictions as well as of COVID-19 measures in the country, travellers can follow the A3M coverage of the COVID-19 situation in China here. For a previous A3M-Report on the driving forces behind China’s approach to COVID-19 and its implications for foreign travellers see here.

Crisis in Bosnia and Herzegovina: Another Pyre for Europe’s Ring of Fire